**Arctic Blue Swiss Shepherds** Russia is due to whelp her Ajax litter approximately 4th March 2015.  Everyone at Arctic Blue and Colwyn Park are excitedly awaiting the event.

Ajax is allowed out of his cage rest and is commencing walking on lead for short distances.  Eski is so happy to have her play mate back in action.

Both Ajax and Eski have been registered on the ANKC Sporting Register entitling them to trial at dog sports.

Ajax fractures his near side hind leg in a playing accident at home here Colwyn Park.  We are devastated at the injury but with our fantastic vet Donna Colvin repairing the multiple breaks he will undergo 6 weeks of recuperation.

"Spring Break" C Y O'Connor Beach, Cockburn for a BBQ lunch and casual get together.

We will have "Houndbags" and dog related items for sale. Fun times in the cold wet month of August. The whites love the weather and the owners love the BBQ.  See you all there.

ESKI has undergone her hip and elbow Xrays for scoring and swabs for all her health checks required under WSSDCA rules.  The results will be published soon.

Another fantastic fun day is planned for the owners and their dogs here in WA.  On 16th June 2013 everyone will meet at Taylor Reserve in South Perth from 10 am for a social gathering.

A BBQ sausage sizzle is available.  BYO drinks.  We allow our whites to free play for a while before spending some training time for our upcoming National show.

Please feel free to attend, come and meet Ajax & Eski as well as 20 plus, other WSSDs.

or see all info and a map at  http://www.freewebs.com/rosehill_manor/fundays.htm

Both Ajax and Eski are attending novice class at Rally O.  They are both excelling though in different areas.

Ajax is really enjoying having Eski as a constant playmate. He is progressing well at agility class, taking the A frame and seesaw in his stride as well as cruising around the jump course at 600mm height. 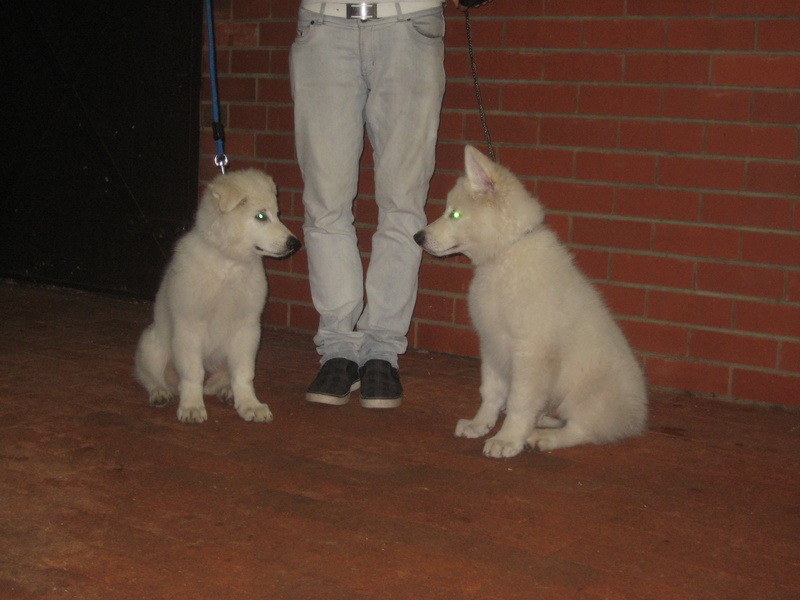 Ajax graduates with 94% from his Advanced Beginners Class. 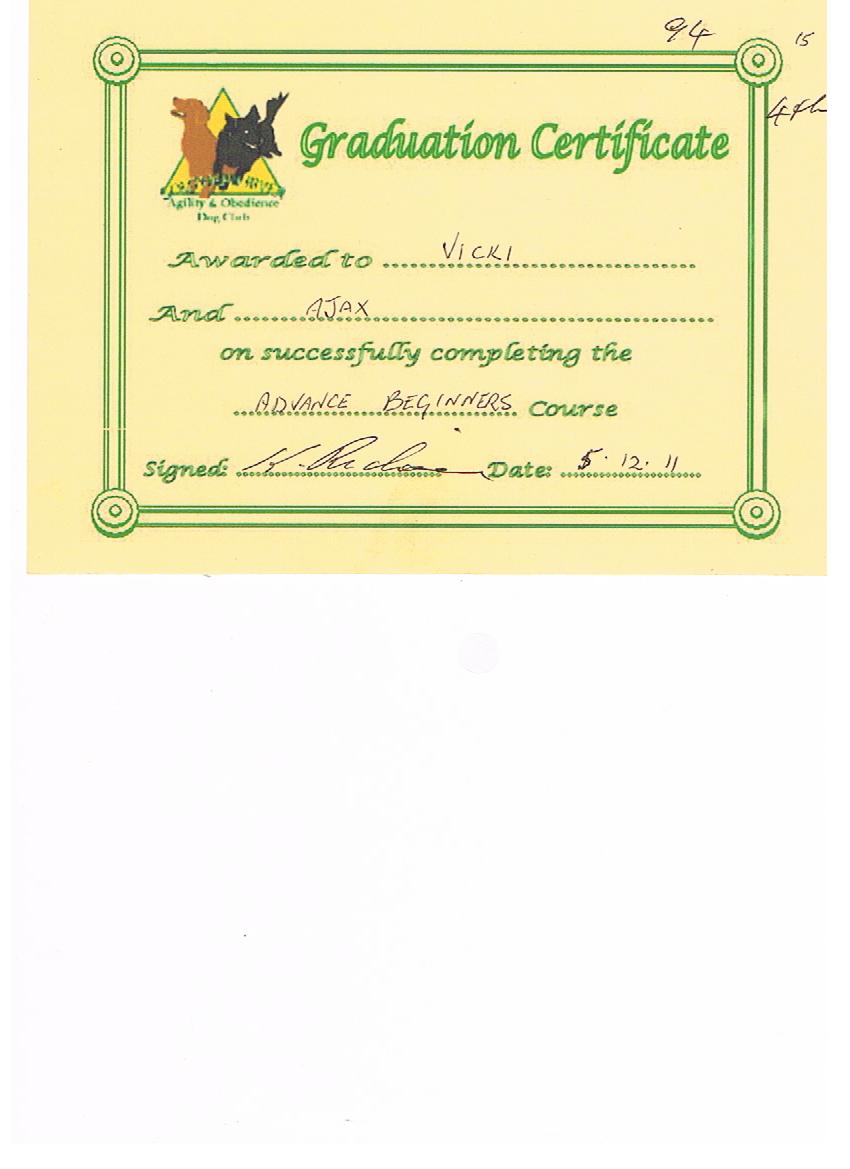 Ajax appears in random slide shows on the updated website. 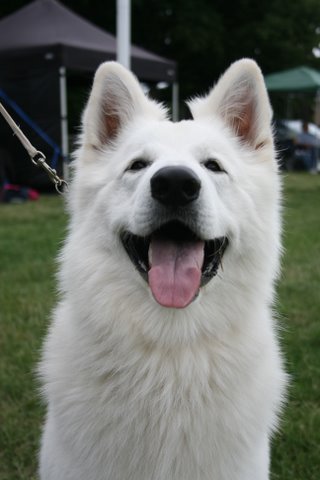 Ajax wins Runner up BEST OF BREED at the Show. See Showing

The drive across 3,400 kms of our vast country went very well with no mechanical problems.  Ajax coped beautifully with the long days in the car with short and frequent 'P' stops.

We departed the first day at 5am local time and made it to Balladonia, a 'Truck Stop' on the Nullabor Plain - about 900km from home.  We were very happy with the progress made.  The evening was windy and noisy as the truck stop's mode of power was from a shed sized generator. 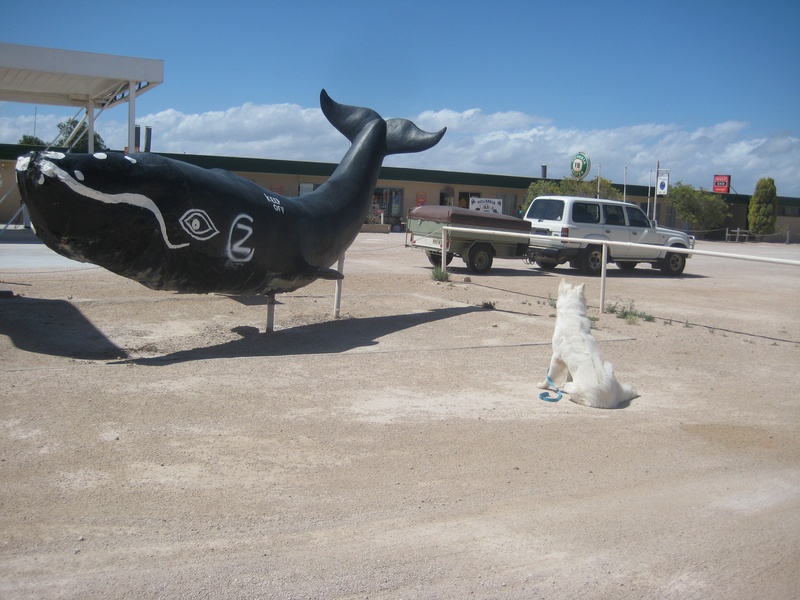 Day 2 took us past the Great Australian Bight where we stopped and took many photos of the vast cliff-edged coastline to both the west and east.  We arrived in Ceduna before night fall after a 1,005km day and booked into a lovely little Caravan Park just over the sand dunes from the beach. It was a much more peaceful night except when Ajax took after an intruder to our site and he nearly pulled the camper down.  He broke his collar and was gone but when I called him he returned immediately. "Who/what" was it? - we'll never know. 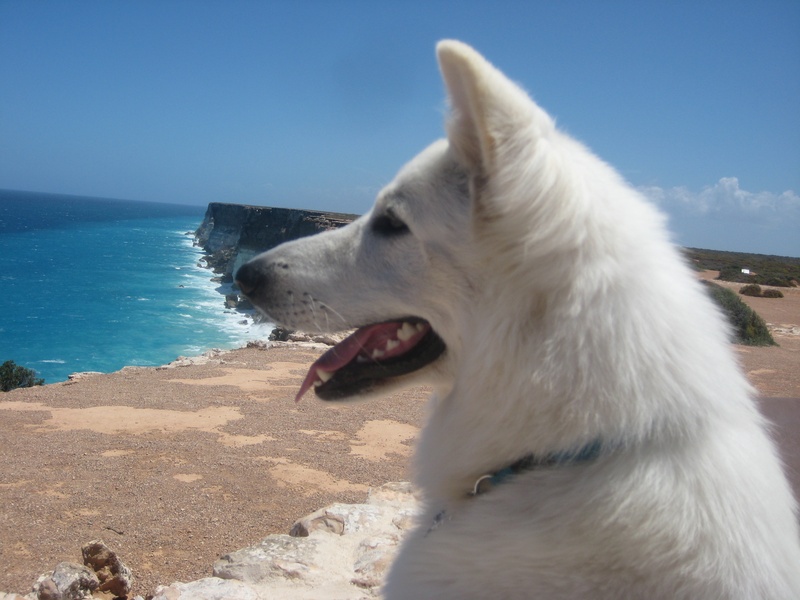 Another long day and another 1000+ km with a successful negotiation of Adelaide's ring road thru heavy mid afternoon traffic found us in the little town of Keith. A beaut little camp site on a grassed site (unseen for 2 days) we were very happy with ourselves. 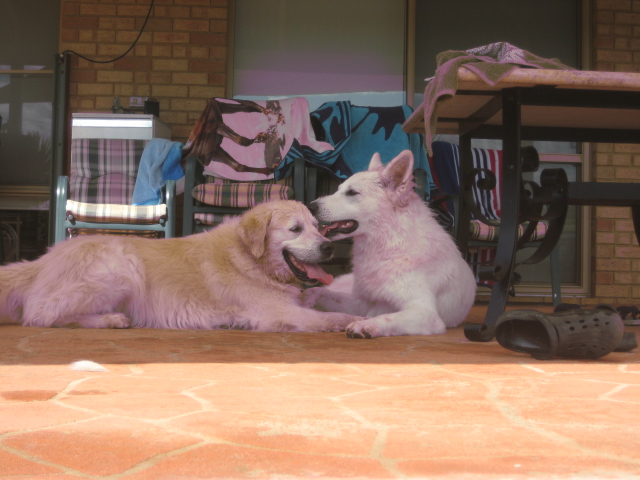 Unfortunately an urgent phone call from home gave us the dreaded news that Taz - Corrie's golden retriever had been traumatised by something and was in severe distress.  The kids were home alone with him and they raced him to the vet but unfortunately he didn't make it.  We were devastated.  The news came back that a snake bite was found on his nose.  Being so far away from home when such a terrible thing had happened really hurt.

Day 4 - We planned to continue our journey to the dog show though we both felt like returning home.  We drove on through Victoria, stopped at Ballarat and washed the Nullabor dust from Ajax and then drove onto beautiful Lancefield.  We arrived just after lunch time and chose our campsite and made ourselves acquainted with Lancefield town.

Having completed the obligatory “washing of the dog”, we were free to experience and explore Lancefield and the surrounding town.  The walk into the town centre showed lovely old buildings both timber and limestone.

We drove around the many small surrounding towns admiring the beautiful green paddocks with grass up to the stock’s belly line.  Obviously foxes are a huge nuisance – we guessed from the bodies on the fencelines.

We drove to Macedon and enjoyed walking around the Hanging Rock – a magnificent natural formation – made famous from the book and movie “Picnic at Hanging Rock”.  We were astounded by the number of picnic goers and tourists attending the beautiful parkland surrounds, the Hanging Rock Information Centre and the nearby racecourse.

We enjoyed a light lunch at one of the many wineries and then browsed amongst many garage sales being held over the weekend.  We attended a local school fair where we were entertained by girls on the drums whilst Ajax entertained numbers of kids wanting to pat and cuddle him.  He lapped up all the attention and then enjoyed a sausage from the bbq.

Back at the Caravan Park we met and chatted to Lesleigh Hall from Elorah kennels, together with another owner Karolyn with 7 months old litter mates, E Kasablanca & E Karis Kobber.  We chatted long and hard about our dogs, past dogs and planned litters.  Meanwhile I was feeling for Corrie who had only just lost her long time companion Taz – and here we were - chatting about our dogs flat out.  The pain she must have been feeling was huge.

Joining us at the Caravan Park was the Coon family with Riverland Casper from South Australia.  Everyone was getting excited about the show TOMORROW!

The morning came crisp and calm.  We walked up the road to the Park at about 5.30am to allow Ajax an early run and expenditure of energy.  The previous days had been very quiet with him just laying around or walking with us. A most unusual pastime for Ajax who usually chases balls, birds or follows me on the horse.

Preparations went well at the Park and soon enough the starting time for the classes came round.  I was very impressed with the “attendance gift bag” given at the show.  It contained our programme, a printed bandanna, white chocolate disc and many other items.  I felt it was a very nice touch!

The classes went by in a blur – so quickly did they happen and then so many people and dogs to meet. I wish I had more time to talk to so many special members. It was lovely to meet Rosehill French Lace - Pia owned by Ray & Irene Hall from Amethyst. Pia is one of Ajax’s mum, Paris’s pups from her Prince litter – only 7 months old and full of sass. So sweet looking and very confident – she’s a wonderful specimen of the WSSD.

I totally enjoyed the classes – running Ajax out and him standing beautifully – as we had been training. In between conformation classes we had to compete in the obedience CCD test.  I didn’t know what to expect however the Judge, Richard Hoffman was very helpful and Ajax didn’t disgrace me.  In the group sit and drop stays, there were about 10 entrants.  After leaving our dogs and walking to the other side of the arena we turn around to see only 3 dogs still there – one of them mine – whew!  All the others had scattered in all directions – it must have looked funny.  Photos see Showing .

All too soon the Best of Breed class came up. It was us against the female Royal Carmen Alkina an intermediate aged bitch imported from the USA.  And she won!

All too soon that day was over – all that preparation – all those kilometers – all that washing of white dog – Yippee – We could get dirty again.